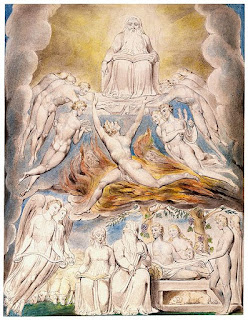 After three Sunday’s of considering the story of Job, we are now in the fourth week of the same story and still we have not got past the second chapter. But my hope is that you will share with me the belief that over these past few weeks together, we have so far discovered a richness to this story that may not have been immediately apparent. I’d really like to think that these meditations on Job have, so far, given us all the opportunity to consider the meaning of human suffering in a world ostensibly created by a loving God. Not only that, but I think this particular story as we get into it, also shows us, the timelessness of human nature as represented, for example in the story of Job’s wife, who in the face of Job’s misfortunes, and hers, simply took the pragmatic view that he should, ‘Curse God and die’. Let us recall again the misfortunes that were visited upon Job: the loss of all his worldly wealth, the deaths of his seven sons and three daughters and later, Satan’s covering of Job from head to foot with boils. And we further recall that all of Job’s suffering came about as a consequence of a dispute in the heavenly realm from an argument if you like, between God and Satan.

And so last week, we left the self-righteous Job, alone after he had remonstrated with his wife saying: ‘You talk like a foolish woman. Should we accept only good things from the hand of God and never anything bad?’ You know, in a way I suppose Job, quite rightly, was bound to say those words. What else could he say? But without his children, who were all dead, and without the support of his wife, and his body covered in those horrendous boils, he had uttered those brave words, but no matter how true, and how relevant and how important though they were, such words could bring little comfort, except perhaps the certainty that at least he was holding fast, holding fast to that rock, to that rock of faith in the face of a devastating storm. And under such conditions, when there is nothing else and there is nothing else left to do, we are left only with prayer; we can always turn to God in prayer.

C S Lewis in the throes of his own grief and bereavement following the death of his wife, Joy Davidman in 1960 wrote: ‘Grief is like a bomber circling round and dropping its bombs each time the circle brings it overhead; physical pain is like the steady barrage on a trench in World War One, hours of it with no let-up for a moment. Thought is never static; pain often is’.

I think most of us can understand that – how such profound grief can seem to circle overhead like a bomber, flying in and out of our consciousness, and our focus. True, there will be moments of relief but then the grief will come back like the bomber, into full focus again before receding into the background only to return again. C. S. Lewis as a First World War soldier would know a thing or two about trenches, the constant shelling, the boredom and the terror. In 1918, he himself was wounded by shell fragments; whilst in the same explosion, the sergeant standing next to him, was killed instantly; and another friend also standing nearby at the time, died of his wounds; shortly afterwards.  Pain and loss, such misery can seem to go on forever.

And so, we return now to the story of Job, from the second chapter as I draw your attention once again to verses 11-13.

When three of Job’s friends heard of the tragedy he had suffered, they got together and travelled from their homes to comfort and console him. Their names were Eliphaz the Temanite, Bildad the Shuhite, and Zophar the Naamathite. When they saw Job from a distance, they scarcely recognized him. Wailing loudly, they tore their robes and threw dust into the air over their heads to show their grief. Then they sat on the ground with him for seven days and nights. No one said a word to Job, for they saw that his suffering was too great for words.

A few years ago, there was a McMillan cancer advertisement, showing a picture of someone alone on a snow swept beach dressed in a theatre gown with a caption that read, ‘Cancer can be the loneliest place’. It’s true that suffering can bring a heightened sense of loneliness or even just plain aloneness. But we have read that in spite of everything, Job still did have friends and thus the Bible tells us:

When three of Job’s friends heard of the tragedy he had suffered, they got together and travelled from their homes to comfort and console him.

Now the basic common assumption about Job’s friends is that they were actually more of a curse than a blessing. And what I mean by that, is that whilst Job continued to proclaim his innocence against his misfortunes, misfortunes that appeared to be divine retribution for his sins or something that he must have done wrong, and whilst Job continued to proclaim his innocence, his friends stuck to the conventional wisdom. That wisdom, that we might know today as karma, is usually expressed in the saying that, ‘what goes round comes round’, in other words, the old Hebrew belief that God would not punish an innocent man.

At the same time, we will all have, no doubt, heard that expression, ‘a Job's comforter’. A dictionary definition of a ‘Job’s comforter is someone who apparently offers consolation to another person but actually makes the other person feel worse.’ I’m reminded of the time that I phoned an uncle to tell him of the death of my mother, his sister, and he said, ‘Oh well never mind’. Bless him, I wasn’t in the least offended and I’m sure that my mother would have seen the funny side too.

But in spite of this negative sobriquet, the ‘Job’s comforter’ a byword for negative comfort, which derives from the perceived attitudes of Job’s friends, we should at least read and consider the text in chapter two that again says:

When three of Job’s friends heard of the tragedy he had suffered, they got together and travelled from their homes to comfort and console him.

Professor E.M. Blaiklok in the defence of Job’s three friends, Eliphaz, Bildad and Zophar was moved to write:

Job was horribly alone. Then came his three friends. They have gone down in history and the language of man as worthless comforters, and people of small understanding. This is hardly fair. There was worth and reality in their friendship, helpless though they proved to be in the face of crushing calamity. They wept and took their place by Job’s side and sat for seven days in silent sympathy, struggling with their thoughts. Here, surely, was fellowship more real than some friends gave.

Dear friends, if there’s one thing, I really want to bring out today in this continuing story of Job and that is perhaps to say that friendship is one of the great gifts of life. It’s easy to lose friends and true friends are very difficult to come by. Someone once said that ‘a true friend is someone who walks in when everybody else walks out’. But in marriage as well as in friendship we should remember that we are always dealing with fallible human beings. Thomas A Kempis wrote that we should, ‘strive to be patient; bear with the faults and frailties of others’ he said, ‘for you to have many faults which others have to bear.’

We will recall that Jesus told Peter that he, Peter, would be the rock on which Jesus would build his church. The disciple Peter, was a loving and loyal friend to Jesus but we cannot forget that evening in the courtyard of the high priest’s house, after Jesus was arrested, how Peter warming himself by the fire, in fear of his own life, denied when questioned that he knew Jesus. He denied Jesus not once, but three times. Bear this in mind when others let us down or when they fall well short of our expectations. Fallible and weak are we all, so weak are we that we even apply standards of behaviour to others that often we cannot even meet ourselves. So let us give thanks for friends, even for such friends as Job had who in his time of distress could weep with him, comfort him and console him. Even in the depths of his misery Job did receive the blessings of friendship.