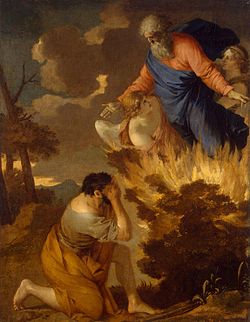 There are thousands if not millions of books expressing different opinions on the life of Jesus and who he actually was. You would never be able to read them all even if you had several life times to spare. When we turn to the pages of the four gospels, we find striking contrasts in the depiction of Jesus. In the Gospel of Mark the story of Jesus begins only with a reference, a proclamation from the book of the prophet Isaiah ‘to make the road ready for the messiah,’ ‘Get the road ready for the Lord’ and  this proclamation is used to good effect by the writer to set the scene for a story of messianic ministry.

I dare say that such language proclaiming the welcome of a messiah would have been good news to the Jews living under Roman subjugation. Perhaps we should have no reason to suppose that Jesus like his cousin, John the Baptist may not then have been viewed any differently from the prophets or itinerant preachers that were a feature of religious life in Palestine.

When God, in the Old Testament, chose Jeremiah to be his prophet, he said:

Before I formed you in the womb, I knew you, before you were born, I set you apart; I appointed you as a prophet to the nations. (1:5)

The words of God, in the Gospel of Mark, at Jesus’ baptism have a similar familiarity:

It could be said that the prophet Jeremiah was just a human being, a creature like us, whereas Jesus is often seen as the Eternal Son of God: ‘begotten not created’, but we have this story in Mark (10):

As Jesus started on his way, a man ran up to him and fell on his knees before him. “Good teacher,” he asked, “what must I do to inherit eternal life?”

We can only reach one of two conclusions from this statement, either Jesus is lying or he is telling the truth and that and in fact he is not God. But if Jesus is lying how can he be God? since we would naturally presume that God doesn’t tell lies. The fact that Jesus taught his disciples to pray, ‘Our Father’, to pray to God and not to him is a telling point. That prayer was the same prayer that Jesus himself used to praise and to petition God.

In the Gospel of John, we are faced with an entirely different picture of Jesus:

In this gospel, Jesus is God. He is the Word, the Logos, reaching out to bring into completeness God’s love and presence in creation. It’s no accident that the beginning of the Gospel of John sounds like the opening words of the first chapter of Genesis.

Clement viewed the Christ figure as the teacher of all mankind. He said that in Christ we are shown how to be Christian, how we are to respond to the love of God. In Johannine theology, Jesus of Nazareth ultimately became Jesus Christ the Eternal Son of God or simply, the Christ. The Hebrew term for the anointed one is the messiah and the Greek term in the language of the New Testament is the Christ. Without becoming embroiled in complex theology, I think even Unitarians can safely say that Christ reveals God, we can say that God is met in Christ and we can also say that through his teachings Christ is a revealer of God who taught us how to be more fully human.

The Lord said to Moses, “Speak to the entire assembly of Israel and say to them: ‘Be holy because I, the Lord your God, am holy. (19:1)

And in the psalms, we can read:

O worship the Lord in the beauty of holiness: fear before him, all the earth. (96:9)

But just because we are called to be holy it doesn’t follow that we have to respond. We are perfectly free to turn away. Indeed, a definition of sin is to turn away from God into a darkness that we might not see or even be aware of. This is why in the Gospel of John - Jesus is described as the light of the world.

I am the light of the world. Whoever follows me will not walk in darkness, but will have the light of life. (8:12)

Again, in the Parable of the Prodigal Son, in the Gospel of Luke we see that this younger, prodigal son, is endowed with a will of his own. The Father longs for the son’s return although he does not prevent him from leaving home. In this simple but profound story, Jesus reveals the love, the grace and the compassion of God. The holiness that we are called to is to be in the world but not of it, for as Jesus said:

No one can live only on food. People need every word that God has spoken. (Matthew 4:4)

Holiness is our difference with a world that says it doesn’t ‘do God’. It’s our way of being in the world, a world that by and large has turned its back on God, but it’s a world all the same, that we can look on with compassion and understanding.

Jesus reminded us that we are called to holiness and that we should strive to be so.

(But) you must always act like your Father in heaven. (Matthew 5:48)