By Every Word from the Mouth of God 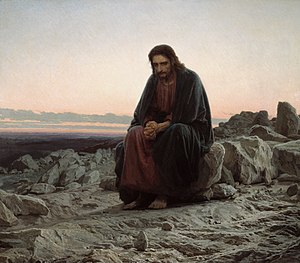 In Lent we are brought face to face with the trials of Jesus in the wilderness as told in the Gospels of Matthew and Luke. Before Jesus was led into the wilderness, we have this unforgettable image of his baptism at the hands of John and then his coming out of the water, the heavens opening and the Spirit of God descending like a dove and God saying, 'This is my beloved Son in whom I am well pleased'. This is a scene, an unforgettable scene, that is etched in the hearts and souls of millions of believers, the glory of transcendence, Jesus enveloped in the love of God. It's a story that will be remembered forever and yet for others gathered at the Jordan River, it could have gone completely unnoticed, so quickly may that moment have passed.

As we move quickly from the third to the fourth chapter of Matthew's Gospel, we see that glory, indeed, is a fleeting thing. How starkly has the scenery changed. After forty days and forty nights of isolation and fasting, the story approaches its climax. But the story centres not on an invincible God but rather the figure of Jesus as a flesh and blood human being. Perhaps in his everyday humanness we might have even discovered there was something quite ordinary about Jesus so ordinary in fact, that walking past you in the street you may not even have noticed him. That same ordinariness prompting disbelief in the synagogue at Nazareth, where those disbelieving words were uttered, 'Isn't this Joseph's son?'

But here we are in our own mind's eye looking on, observing Jesus as a hungry and weakened human being, much in need of sustenance and there before him the round stones looking for all the world like rolls of bread. And then the tempter's challenge, 'If you are the Son of God, command that these stones be made bread'. It's not hard to imagine, the power of that temptation, the hunger, the heightened sense of smell and taste, the imagining of freshly baked bread. Probably by this ravenous stage any kind of bread would have been more than welcome. Bread had appeared in the wilderness before, after God had said to Moses, 'Look I am going to rain down bread from heaven to you.' (Exodus 10:16)

This providential God who can and does supply our needs, this Father God to whom all are children; why should we not take and eat all that we need? And yet Jesus in his time of trial refused precisely because the priority was God, of subjugating the flesh to the spirit. So, Jesus said that we do not live by bread alone, but by every word that comes out of the mouth of God. These words were familiar to Jesus.

Remember how the Lord your God led you through the wilderness for these forty years, humbling you and testing you to prove your character, and to find out whether or not you would obey his commands. Yes, he humbled you by letting you go hungry and then feeding you with manna, a food previously unknown to you and your ancestors. He did it to teach you that people do not live by bread alone; rather, we live by every word that comes from the mouth of the Lord.  (Deuteronomy 8:2-4):

Further on in this text the people of Israel are reminded that even in the times of plenty they should not forget 'the Lord your God, who rescued you from slavery in the land of Egypt'. In the same way, today we too are reminded that we simply cannot live by bread alone, that we should not turn our backs on God if we wish to remain blessed by his presence in our lives.

But I assure you of this: If you ever forget the Lord your God and follow other gods, worshipping them and bowing down to them, you will certainly be destroyed (8:19)

Today, other gods are being worshipped and our connection with God is becoming eroded through cynical disbelief, through the worship of science, through the worship of false ideologies as though they have all the answers. And so, the worship of God is displaced through intellectual arrogance; man puffed out with ignorance and false pride worships not God but himself. Today, the rainbow flag and the elevation of identity politics have become venerated icons of public worship, so much so that they have found their way into our churches leaving no room for the real living God. In the Bible this is known as idolatry. Idolatry can be anything that gets in the way of our worship of God. The Bible as a matter of historical fact recorded idolatry as the worship of Baal, the practice of magic and the sacrifice of children. We see this today in the murder of the unborn child and the sacrifice of childhood to all the various manifestations of so-called progressive policies that cut against the grain of the Judaeo-Christian tradition; beliefs and traditions that hitherto have served countless generations.

When we acknowledge that we cannot live by bread alone, but by every word that comes from the mouth of God we recognise our dependence on Him, we need bread but we need God first. Without a 'God first policy' we rapidly become prey to the idea that there is no God. That way lies despair and the wickedness we see in the world today. When Joshua was an old man, near the end of his life and after he had led the tribes of Israel into the Promised Land, he gathered them all together and put before them a challenge:

But if you refuse to serve the Lord, then choose today whom you will serve. Would you prefer the gods your ancestors served beyond the Euphrates? Or will it be the gods of the Amorites in whose land you now live? But as for me and my family, we will serve the Lord.

When Jesus declined to turn the stones into bread, he made a statement about his relationship with God, he put God first, like Joshua, his statement, his confession was that he would serve the Lord. The challenge for us today, is to do the same. Let us serve the Lord our God.