The Leadership of Churchill 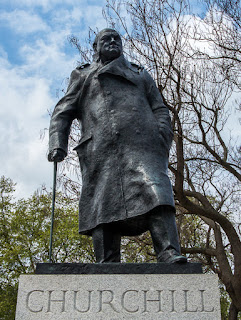 The Leadership of Winston Churchill

You ask, what is our policy? I can say: It is to wage war, by sea, land and air, with all our might and with all the strength that God can give us; to wage war against a monstrous tyranny, never surpassed in the dark, lamentable catalogue of human crime. That is our policy. Winston Churchill 1940

You ask what leadership is? That question can be summed up in two words: Winston Churchill. Churchill was a great war time leader. We and future generations who love freedom have much to thank him for. Churchill’s leadership as the British prime minister during the Second World War. His first significant achievement in 1940 was to prevent the then foreign secretary, Lord Halifax from seeking a negotiated peace settlement with Hitler. In time, Churchill’s bellicose attitude proved to be correct but, in his famous Blood, Sweat and Tears speech, he certainly did not exaggerate the cost. Already I can hear the objections to this well-deserved praise for Churchill. A candid response in the man’s own words comes to mind, ‘I should have made nothing if I had not made mistakes.’ The humility to acknowledge one’s own mistakes and to learn from them is a sign of character and character is a leadership quality.

The above few words taken from Churchill’s famous speech have a message and a resonance for each of us today. Our policy should be to wage war with all the might and with all strength that God can give us. We should wage war against monstrous tyrannies that are ever more present in the creep of totalitarian ideologies at home and abroad today.

In May 1940, Churchill’s message was grim and uncompromising and yet it was inspiring and totally appropriate. At that time the evacuation of the British and Allied troops at Dunkirk was still days away. Meanwhile, the Nazis in Germany, Austria and occupied Poland were already murdering those with mental or physical disabilities. It was SS policy to eliminate ‘life unworthy of life’ which in 1941 led to the creation of extermination camps and the Final Solution.

The sheer horror and evil that can take hold of any society is not always obvious. Wickedness on that kind of scale is so shocking and is so hard to comprehend and describe that we falsely believe that it can’t happen again, or that it can’t happen in our own democratic civilised society. But the price of such security has to be built on eternal vigilance. Evil has many disguises, and the road to Hell, as they say, is paved with good intentions. Churchill remained politically isolated when he said that the peace agreement signed by Hitler in 1938 and celebrated as ‘Peace for our time’ ‘brought shame to England’. True leadership requires bravery and an unflinching steadfastness in the face of opposition. In the storms of life, the true leader will speak the unpalatable truth rather than the convenient lie.

Andrew Roberts in his much-acclaimed biography of Churchill brought to mind the words he wrote on Friday 10th May 1940, the day he became the prime minister, ‘I felt as if I were walking with destiny, and that all my past life had been but a preparation for this hour and for this trial . . . I could not be reproached either for making the war or with want of preparation for it. I thought I knew a good deal about it all and I was sure I would not fail.’ Roberts wrote, ‘He had believed in his own destiny since at least the age of sixteen, when he told a friend that he would save Britain from a foreign invasion.’

Shakespeare wrote, ‘Some are born great, some achieve greatness and others have greatness thrust upon them’. ‘Cometh the hour, cometh the man, is a saying we are also familiar with, it suggests that at a crucial moment, a time of urgency and uncertainty, a leader, a saviour will emerge. We can debate whether leaders are made or born but destiny follows her own rules. Every individual is a product of history; Hitler no less than Churchill. But to leave it at that would be to deprive ourselves of knowledge, insight and understanding.

The statue of Winston Churchill that stands in Parliament Square, London, is based on a photograph taken of him inspecting the bomb wreckage of the Chamber of the House of Commons in May 1941. The statue conveys an inspiring yet stolid pose in the face of adversity, it reflects the leadership that gave the nation the will to survive, to succeed and to win in desperate times. Churchill’s statue is a silent sermon on an important aspect of leadership proclaiming that one must keep a steady hand at the helm during a storm. Churchill said, ‘If you’re going through hell keep going’.

A leader has to become a living testimony to his vision. A leader’s conduct is crucial to his image. If he wants the people to be there for him, he has to be seen to be there for them, to mourn with them when they mourn, to rejoice with them when they rejoice, to be steady, to be dependable and to inspire hope and courage in times of despair; such leadership is not only required, it is paramount.

There is the notion of the self-made man or self-made woman but who in any true sense is really self-made? Churchill was born at Blenheim Palace, his paternal grandfather was John Winston Spencer-Churchill, 7th Duke of Marlborough, so Churchill came from an aristocratic background but that in itself could not be the single guarantor of success.

In his book, The 21 Irrefutable Laws of Leadership, John C Maxwell wrote, ‘He who thinks he leads, but has no followers, is only taking a walk’. Maxwell made the obvious yet profound point that even with great ability if you cannot influence others then, you will not be able to lead. This brings us back to a realisation that our relationship with others has to be based ultimately on who we are. Who we are is the measure of our inner life, and the measure of our deepest convictions. As First Lord of the Admiralty, during the First World War, Churchill was responsible and was blamed for the disastrous loss of life in the Dardanelles Campaign 1915-16. Later in life, a number of other serious political misjudgements would ensure his marginalisation during the years, 1929-1939.

But deep within the soul of Churchill remained that undimmed vision of destiny. Every leader must have a vision, every leader must have the inner resources and the drive to go on, so it was with Churchill, ‘cometh the hour cometh the man’. There need not have been a war with Nazi Germany, the easy thing to do would have been to have supported an accommodation with Hitler and all his evil. Today there is much confusion sown by so-called liberals concerning our past history. Indeed, it has become fashionable amongst a swathe of the population to denigrate all that was achieved during the war years 1939-1945 and in the aftermath. Indeed, in this perspective there is a wilful blindness to the cost of that sacrifice in human life or recognition of the loss of Britain’s position as a major world power, as a sacrifice that was ultimately made in exchange for freedom and democracy against a vile totalitarianism. None of this could be achieved without leadership.

Churchill’s observations on the creeping tyranny of Germany under Nazi rule were true and he knew what had to be done when others were trying evade the issue and hoping that the problem would go away. In Brian Wren’s Unitarian hymn/song, ‘Bring Many Names’, there is a line that speaks of an ‘old aching God’, ‘calmly piercing evil’s new disguises’ and evil does stand before us today in a new disguise. When Parliament ceases to function properly, when laws are made by diktat, when civil and religious liberties are seriously curtailed, when arbitrary rules are enforced, when we are told that Christmas is cancelled, when the police enter a church to break up a Sunday service, when self-righteous ideologues will brook no debate, when the majority quietly hope that the problem will just go away, we need a leader who will declare that, ‘Our policy is to wage war.’

Put on the whole armour of God, that you may be able to stand against the wiles of the devil. For we are not contending against flesh and blood, but against the principalities, against the powers, against the world rulers of this present darkness, against the spiritual hosts of wickedness in the heavenly places. - Ephesians 6:12