The Trinity, A Unitarian Trinity, and the Universal Christ 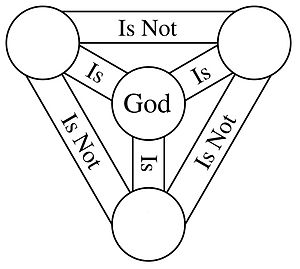 It is sometimes said that the Unitarian and Free Christian churches are non-creedal.   Whilst Free Christians may legitimately make this claim we, as Unitarians, cannot.  If ‘creed’ is taken to mean a statement of belief, then our belief - whether we like it or not, is defined by that one word: Unitarian.

That single word sets us apart from those churches which affirm the doctrine of the Trinity, the accepted Christian orthodoxy. Whereas Unitarians believe in the undivided unity of God, the mainstream churches declare a trinitarian creed, classically formulated by the Council of Nicaea in 325 and later refined in the Athanasian Creed. The resultant doctrine describes God as ‘one in three and three in one’. That is, the Father is God, the Son is God and the Holy Ghost is God.

The controversy focuses on our understanding of the status of Jesus.  Who is the man we encounter in the gospels meant to be?  He is depicted variously as an itinerant teacher, healer and prophet - Jesus of Nazareth and as Jesus Christ – the messiah, the anointed one.  In Trinitarian theology, Jesus Christ is the unique and exclusive Son of God and is God.  In Unitarian theology, there is only God and therefore, Jesus of Nazareth or Jesus Christ although revered is not worshipped as the exclusive Son of God.

The much loved Unitarian minister, David Doel, would often tell the story of William Blake, eighteenth century painter, poet and mystic; asked if he believed in the divinity of Jesus Blake replied “He is the only God… and so am I and so are you”.

The classic rebuttal to the idea that God exclusively assumed human flesh and became a man in the form of Jesus Christ was given by the 19th century Unitarian and theologian, James Martineau: ‘The incarnation is true, not of Christ exclusively, but of Man universally, and God everlastingly.’

In his book The Man they Called the Christ (2009), David Doel gave a very clear exposition of the Trinity.  In his view ‘it is perfectly possible, indeed theologically necessary, for us to elaborate a doctrine of the trinity acceptable to Unitarians.’  It may seem strange indeed that Unitarians should wish to accept the concept of a trinity until one realises that our contention arises, not from the concept of God expressed as a trinity, but rather from the associated theology set out as dogma within the Nicene Creed.

The Trinity of the Nicene Creed has often been used by the Church to define those who are – and are not – able to subscribe to its theology.  For the mainstream churches, acceptance into the faith community has traditionally been conditional on accepting a statement of belief that includes the virgin birth, the physical resurrection of the crucified Christ and the notion that Jesus is the incarnate God, fully human and fully God, who came down to live amongst us, to suffer and die for our sins. An account of how the Church developed this dogma can be found in How Jesus Became God: the Exaltation of a Jewish Preacher from Galilee (Bart Ehrman, 2014).

Answers to the question “Who was Jesus?” also develop through the gospels as can be seen by comparing the three earliest (synoptic) gospels with the later Gospel of John.  For Mark, the divinity of Jesus is expressly denied “Why do you call me good?  No one is good except God alone” (10:17-18).  In contrast, the opening proclamation of the John’s gospel is an unambiguous statement that Jesus, the Word, is God.

This sounds a bit like reading the opening verse of the first chapter of Genesis. And that’s exactly how it’s meant to sound.  Jesus Christ, the exclusive Son of God, was right there with God at the very beginning; co-eternal with the Father. John’s Christology shows a fusion of Greek philosophy - the Logos (Word), and Jewish religious thought (the Christ/ Messiah) which come together to create the second person of the Trinity.

In the opening lines of Genesis, in the King James Bible, we are told that in the beginning the earth was ‘without form and void’ and that ‘darkness was upon the face of the deep.’  Perhaps we can imagine a great loneliness and an overwhelming and ultimately uncontainable love breaking forth and pouring itself out. The great Creator manifesting the Word as all creation, in all creation.

Thus, the indwelling Logos, the likeness of God is embodied in all that is.  It exists in all places and at all times, within all that is and every person (Genesis 1:27). Again, in Martineau’s words, the incarnation ‘is true, not of Christ exclusively, but of Man universally, and God everlastingly.’

Bearing in mind those words of David Doel, and his desire to elaborate a doctrine of the Trinity acceptable to Unitarians, I suppose we can only ask how this could be achieved with any unanimity? The answer may not be obvious but these words of Richard Rohr offer inspiration and fresh hope:

‘Everything visible, without exception, is the outpouring of God. What else could it really be? ‘Christ’ is a word for the Primordial Template (‘Logos’) through whom ‘all things came into being, and not one thing had its being except through him’ (John 1:3). Seeing in this way has reframed, reenergised, and broadened my own religious belief, and I believe it could be Christianity’s unique contribution among the world religions.’ The Universal Christ (Rohr, 2019)

Rohr’s concept of the Primordial Template (‘Logos’) could be the paradigm shift we desire.  If we can see that of God in everyone we meet, if we can see the glory of God in all creation and if we can  see the goal of the spiritual life as really the discovery of the indwelling Logos and our essential and indestructible unity with it, maybe we could embrace the Universal Christ in a new Trinitarian understanding.
Posted by Bob Pounder at 08:26