Civil and religious liberty the world over? Where are the Unitarians? 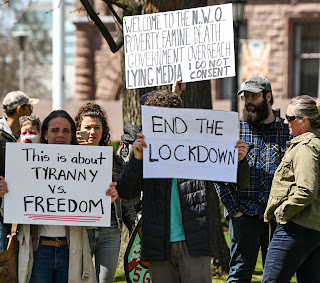 In my role as a minister, I mostly write concerning the moral and spiritual life. However, I feel that under current circumstances that I should say a few words concerning the present COVID-19 crisis. It seems to me that the Church as a whole has nothing to say on this situation other than to echo the official line of the government. Either that, or it remains muted.

Below I re-print a copy of the monthly letter I normally send out to my congregation.

Unitarians are supposed to be in favour of religious and civil liberties. In the past year we have seen the suspension of religious and civil liberties throughout much of the world and in the United Kingdom. I am of course talking about the government’s response to COVID-19. In March, the Imperial College warned that unless certain measures were taken, the virus would lead to the NHS being overwhelmed and that there would be 250,000 deaths in the U.K. As we now know, nothing on this scale actually happened. But the government response, at the time, to this and other dire predictions resulted in an unprecedented lockdown and the severe curtailment of civil liberties not seen since the days of the Lord Protector, Oliver Cromwell. The stated government objective last March was to ‘flatten the curve and to protect the NHS’.

This being achieved, in July, we were allowed to return to public worship under somewhat restricted conditions. Previous to this, our last Sunday service had taken place on the 15th March. From the General Assembly as a whole, I have not heard so much as a whisper in terms of challenging the government’s actions or the massive propaganda campaign to which we have been and are continually made subject too. This particularly nasty virus has a lethality within the normal range of flu, but it is a fact today that pneumonia and flu is killing more people than COVID-19. Even the publicity given to rising COVID-19 infections cannot alter the fact that its lethality within the population as a whole remains low.

Moreover, it is accepted that COVID-19 can be a fatal infection but not in 99% of cases. When this virus first came to public notice our government leaders could be forgiven for saying that they knew very little about it. This argument no longer holds water. We know that it affects a certain demographic; the elderly and those with certain pre-existing health conditions. Not one healthy child has so far died from COVID-19 and furthermore there is no evidence that children can actually pass the virus on.

As we continue through October, the massive wreckage to the economy and people’s lives wrought by lockdown measures is obvious and getting increasingly worse. As we continue to receive the media’s government inspired propaganda, we should bear in mind the recent statements from government scientists forecasting that have stated that by the middle of this month, each day there will be 200 deaths per day from COVID-19 and each day there will be an extra 50,000 new cases. Taking into account the available information, we can see that this is not likely to happen, neither is there going to be a ‘third wave’; a ripple maybe.

To be clear, the flu season is now upon us and of course there will be some increase in the prevalence of COVID-19, but it is not going to have any significant impact. In two separate statements the Prime Minister, Boris Johnson has suggested that he may suspend his ‘rule of six’ on Christmas Day thus allowing grandparents and others the right to attend a family gathering for dinner and furthermore that this coming winter is going to be a ‘bumpy winter’ for all of us. But it’s been unrelentingly bumpy since the lockdown began on 23rd March. I suppose we should be ever so grateful to the Prime Minister that he is considering letting us have Christmas dinner with our loved ones.

The Prime Minister’s calculation is perhaps that the cavalry will arrive by then or shortly afterwards, in January in the form of a mass vaccination programme that may be rolled out with some assistance from the military. This view was recently expressed in a speech to the House of Commons by the Conservative MP, Tobias Ellwood. Mr Elwood is the Chair of the House of Commons Defence Select Committee. He also holds the rank of Lieutenant General in the 77th Brigade, the psychological warfare unit which assists the Cabinet in shaping public discourse and controlling the Covid-19 narrative.

In the same speech to the House of Commons, Mr Elwood said, ‘I believe that the biggest challenge will be in managing the transition period – potentially up to a year – when parts of our society have been liberated from the threat ​of COVID-19 and seek to return to normality, but those who have yet to be vaccinated are still subject to social distancing rules.’

Whichever way you look at it, current government thinking and policy is impacting adversely on the population as a whole and has enormous implications and consequences for religious and civil liberties. Increasingly it is being shown that the thinking behind the government’s behaviour is both irrational and authoritarian. Those who have legitimately challenged the government’s narrative are regularly dubbed by the press as ‘conspiracy theorists.’ The use of such dismissive terms, it can be argued, is merely a device to shut down the debate. But then public confidence can become somewhat dented when some of the statements of the ‘conspiracy theorists’ actually turn out to be true; 'The Great Reset' comes to mind. Speaking of public confidence, who could actually believe that the UK’s chief scientific adviser Patrick Vallance has £600,000 of shares in vaccine maker, GlaxoSmithKline (GSK). According to the Metro newspaper, ‘GSK is one of over 20 pharmaceutical firms around the world racing to provide a vaccine for coronavirus. The manufacturer has deals with the British and US governments to supply them with jabs, subject to terms in a final contract.’

In a similar article published in The Telegraph a statement read:

‘Government denies claims of potential conflict of interest, maintaining he is not involved in commercial decisions on coronavirus vaccines.’

No conflict of interest? We might beg to differ.

My best wishes as always,